Free Shipping In USA on Orders Over $100
Questions? Contact Us >> 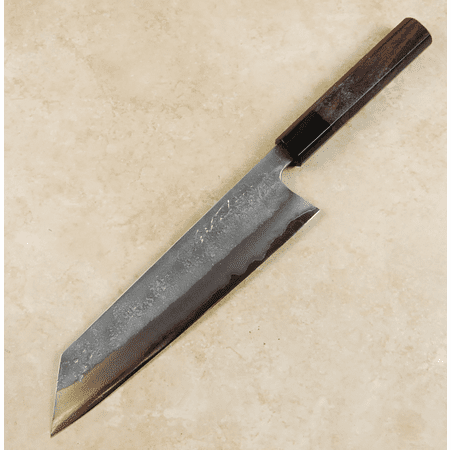 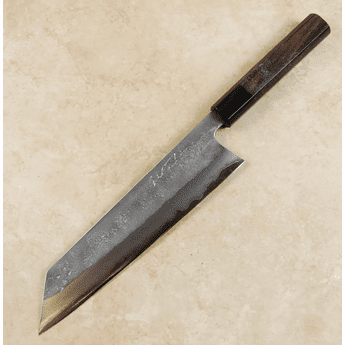 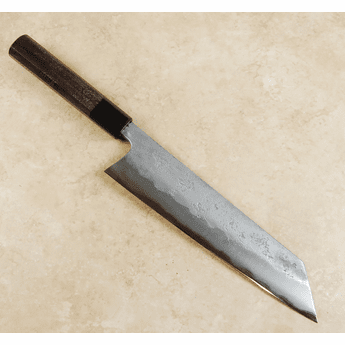 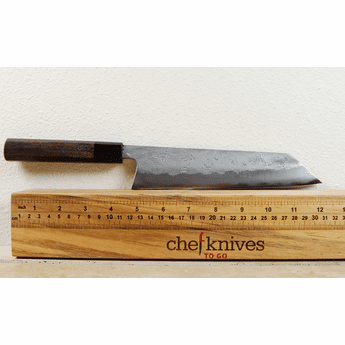 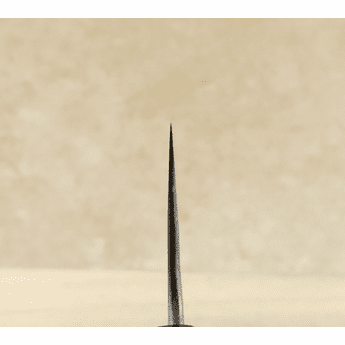 The Matsubara Blue #2 Nashiji Kiritsuke 210mm has, like most kiritsuke style gyutos, a profile that is quite flat from the heel to about two-thirds along to the end. It then transitions into a gentle curve to the kiritsuke tip. The blade length is a medium 212mm, which is perfectly proportioned to the 48mm height. Of course, the outstanding physical feature is the reverse tanto tip. Not only does this result in a knife with a flatter profile but also one with more blade-forward weight distribution. This is a fairly robust blade that will find favor with users looking for a knife that feels solid and stiff.

The Blue #2 core steel is a very popular carbon material that has the same carbon content as white steel #2, but with additional elements chromium and tungsten. With these additional ingredients, Blue #2 blades often display better edge retention and durability. The outer stainless steel cladding aids in rust prevention and ease of general maintenance.

Fourth generation blacksmith Katsuto Tanaka is the principal blacksmith at Tanaka Kama Kogyo, a famed shop in the town of Matsubara in the city of Omura, Nagasaki Prefecture. We're big fans of Tanaka San's work. This hand crafted knife is truly a family affair with mother, son, grandson, and wife assisting Mr. Tanaka when making these knives.

2 review(s) WRITE A REVIEW (Reviews are subject to approval)

Firstly, the knife shown in the video and photos above is not the knife I received. I received a much better iteration or evolution of that knife. The knife I received was much lighter, with a taller, rearward swept heel, reminiscent of Tanaka-san's gyutos of late. The grind is much higher, and results in a wide bevel and much thinner profile above the edge. The tip especially, is absurdly thin. It's pretty thick coming out of the handle, but it thins out quickly with a very attractive distal taper. It has a fair amount of belly, certainly more than say, a Moritaka, but not as much as Tanaka-san's gyutos. It definitely excels at pushing and slicing. Fit and finish is a little better than what you'd expect in this price range. Chiseled kanji, sealed tang and relieved edges on the spine and choil. The blade is nice and straight, and centered in the handle. The handle, however, is something I'm disappointed with. It's not the rosewood handle in the photos or video. It's a pakka octagonal that I can only describe as eclectic. The vertical plywood layers alternate in color between a rosewood color and an iridescent emerald green. It has been shaped in such a way that the sides are green, and you see the alternating layers from the back, above and below. It does have a pakka wood ferrule, and the handle is smoothly finished, it's just not my taste, and I would have preferred the rosewood handle.
As for performance, the ootb edge is usable. It's a bit rough, but not offensive. I spent about ten minutes lightly stropping on a #4000, #8000, and then stropping a few strokes on bare leather. It was a hundred percent better after that. It still has some bite, but slides effortlessly through everything. Edge retention is what you'd expect from Blue #2. I've used it daily for a few weeks in a home kitchen environment, and no issues.
In closing, this product was much better than I expected. My expectations were based on the photos and video, which I would recommend updating to show the current evolution of this knife. The current overview does not do the knife any justice. Handle aside, I'm very pleased. This is a well crafted product.

I purchased this kiritsuke knife since I've been waiting for the 240mm. It was a great buy and can't wait for the 240mm to be available, the stainless cladding makes it easy to care for. The hammer tone makes it a good looking knife overall. PS.. Keep Making Video Reviews... good way to learn about your products.

© 2002 - Chef Knives To Go. All rights reserved. Check out our Online Cutlery Store.