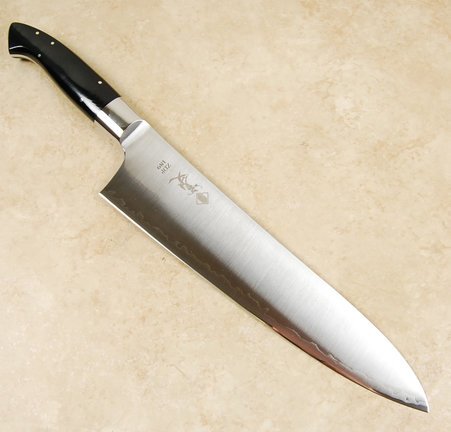 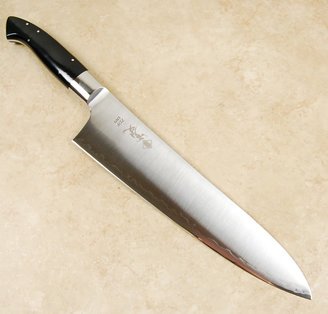 Kanjo Tsukahara began blademaking just five years before we met him, when he started working with his father Tsukahara-san, maker of our Kohetsu HAP40 and AS lines. He has taken to the job in an amazingly short time and is now producing some very nice blades, especially considering the short apprenticeship. Both father and son are master sharpeners and they only do edge sharpening on doughnut wheel machines.

Over a beer a while ago we asked Kanjo-san to make some knives out of the Hitachi steel known as ZDP-189. It is one of their top steels, containing large quantities of carbon and chromium. This combination results in very high levels of hardness with ZDP-189 knife blades averaging around 64 HRC. Kanjo-san is able to take these blades to an even higher 65 HRC.

The knives featured here are the first results of this collaboration. They are made with a stainless steel cladding and are laser cut from a san-mai sandwich. The hairline finish is artfully applied and together with the beautifully formed bolster and unusual handle design result in a knife with some interesting design elements and a subtle grace to its overall appearance. We particularly like the curved spine and lovely edge profile, both of which show an immense amount of design maturity.

We look forward to working with this exciting young blade maker in the future.