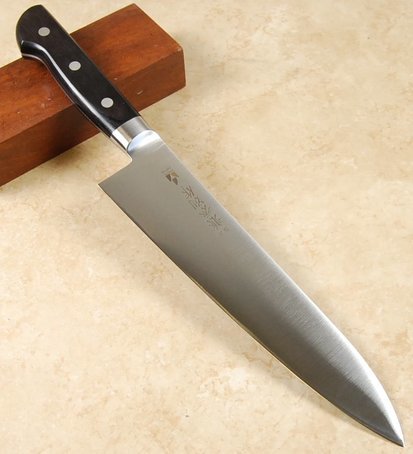 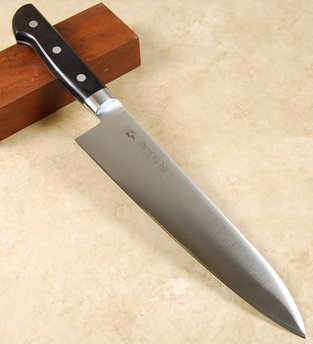 The Kanehide TK Gyuto 210mm is a wonderful value knife and one of our favorite recommendations to newcomers. It is made with a semi stainless steel using a mono steel construction. The knife has a beautiful aesthetic simplicity and the great TK steel ensures your new blade will not discolor or rust as long as some simple maintenance steps are followed after each use. This gyuto has a versatile shape for just about any cutting style, from rocking to slicing to chopping.

The thin and pointed tip of the Kanehide TK Gyuto 210mm makes for impressive precision cuts and detail work. The blade height is not too tall at 47mm, which is about perfect for this length. The knife has a slender-sized western-style handle, and is quite light at 6.5 ounces, making this an ideal choice for small- and medium-sized hands. The 210mm size is also great for cooks working with smaller cutting boards.

This knife is exceptionally well balanced between blade and handle, and feels great using both western and pinch grips. The handle is made from a black Japanese pakka wood, which together with the stainless steel bolster will last the lifetime of the blade.

5 review(s) WRITE A REVIEW (Reviews are subject to approval)

Balanced and scalpel-like sharp, it outperforms all my german knives. The most important thing to remember is to clean and wipe dry within a few minutes after use. Overall, very pleased.

Got the paring knife from the tk line for my girlfriend and we both loved it. Got her this 210mm gyuto for Christmas and its one of the best cutters I've ever used. Very light but stiff and sturdy. Can't wait to get the nakiri

I wrought a more detail review, but it got eaten by the server and wasted my time. So I will make this one short and sweet, but hopefully capture the essence. For $99 dollars you can't miss with this knife. It came nice and sharp. the intial edge seemed a hair chippy. I had some minor micro chips, but I also cut some candied peanuts with it. After the initial sharpening I never had any issues. I used it as a line knife for about a year and love it. I will say it initially reacted quite strongly. It is definetly not stainless, and I would hope someone would not expect it to be. I had never had a semi stainless and kind of thought it would be the same. For this particular knife it wasn't. Initially I cut garlic and onions. It fumed tremendously. It turned a blotchy gray with specs of black. It even discolored some of the first onions. I washed the knife and put it in my bag. I never had any reaction after that. I used it on the line sometimes leaving it moist. I never had any issues with rust or problems. It didn't shine or shimmer, but it was a heck of a cutter. I sold it to upgrade and made somebody very happy. It cut somethings better than my new knife, like the end of a brussell sprout. I could just flick chop it with this knife. For a home used I would highly recommend it. For a pro on budget I would also highly recommend it. It sharpens well and is easy to touch up. You will have to upkeep it more often, but that is to be expected with this heat treat. I wouldn't even think of getting something like a shun classic, global, or even a tojiro over this knife. Nevermind about the short and sweet part.

Great great value blade! At first, I wasn't sure this was a semi-stainless steel as it refused to take on even a mild patina. However, the patina started after my first wash with Barkeeper's Friend. Usage of this knife confirms the impression that the steel hardness is above HRC60. It's a very nice hardness that gets sharp with very good edge retention! For the price, this knife can't be beat. The fit and finish are good with nicely smoothed out spine and choil. The handle scales are flush with the tang, but since this knife is new, I do expect possible scale shrinkage in the future. This competes very well with the Kikuichi TKC as well as the similar semistainless 'clone' from other sellers. I don't mind that the kanji is screened on rather than engraved. The knife surface is much easier to wipe down this way. Get one at this price while you can! I think this would make a fabulous recommendation for an introduction Japanese knife or for a thin workhorse in any professional kitchen.

This knife has a very nice grind to be so thin. Just glides through produce. Is a proprietary semi-stainless steel that has a great feel on the stones and takes a spectacular edge. Very versatile profile and nimble feel. An excellent general purpose knife.This is a whole lot of knife for the money, one of the best deals on the site!