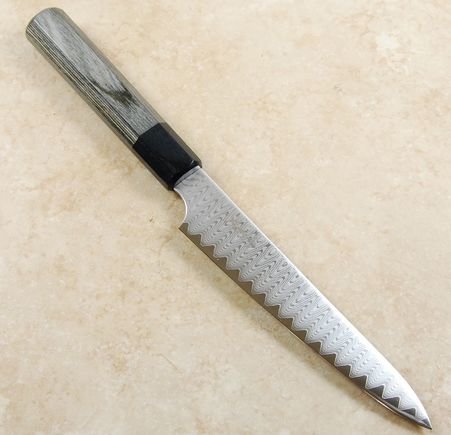 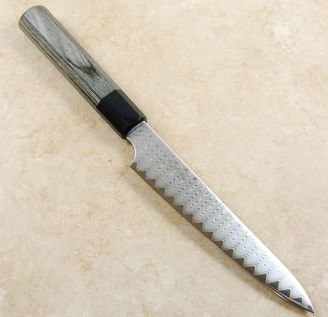 Kanjo VG10 Ladderback Damascus Petty 150mm. We're suckers for damascus blades. And when it comes to great looks very few patterns can better the ladderback design. Ladder damascus has a more organic look than geometric patterns like herringbone and diamondback, but it is more uniform than the more widely known random patterns.

The rendition presented here is a really nice example of the design style realized in VG-10 and VG-2 steels. These stainless alloys are often used together in pattern-welded damascus steels. VG-10 is similar to 154CM but with a slightly higher chromium content, which results in better corrosion resistance. There is more vanadium as well, which makes it slightly tougher. It is relatively hard and can get extremely sharp. VG-2 is fundamentally a lower carbon version of the Takefu VG1 stainless steel. It is still high carbon steel by knife marketing definition, though.

The really special-looking and feeling handle is constructed from grey pakkawood octagonal and finished with a black pakkawood ferrule.

The Kanjo Ladderback Damascus VG2/10 Petty is a very versatile and good looking knife. It will chop, slice, and cut almost any small to medium ingredient. It is also compact enough to be a perfect paring knife or tool for delicate and precise usage such as garnish preparation.