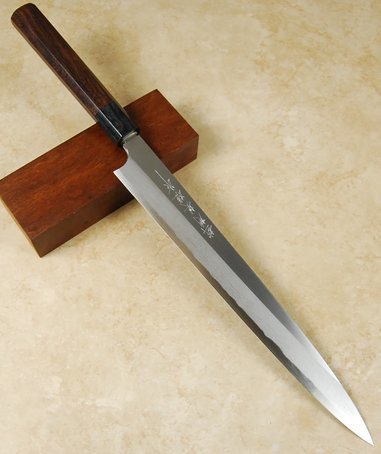 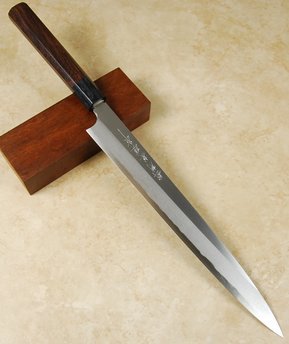 The Kitaoka 270mm Yanagiba Blue #2 occupies the sweet spot in yanagiba lengths. Perfect for most sushi and protein slicing in almost every environment. The blade is long enough for a one-movement pull cut, essential for preparing sushi where a sawing action would destroy the delicate flesh and result in an unattractive slice.

Kitaoka only makes traditional Japanese knives. He has put all his time and effort into perfecting a few skills and knife styles rather than attempting to be a general practitioner of all blades and steels. His steel of choice is Aogami Blue #2. A high carbon alloy with added chromium and tungsten. These elements impart a toughness to the steel and aid in edge retention and overall durability. The alloy is hardened to 63-64 HRC. Of course the blade is going to be reactive so please make sure to thoroughly dry it after every use.

Comes with a rosewood octagonal handle. Please note Kitaoka installs the machi on his knives with a gap that is called Tokyo Style. It's not a flaw it's an aesthetic choice based on a traditional way of installing the handles. See photo #4 for a visual.

3 review(s) WRITE A REVIEW (Reviews are subject to approval)

So my first Japanese knife was a 200mm Shun yanagiba. Not the best size for that knife and not perhaps the best steel or best value brand, but you've got to start somewhere. Since then I've bought and used.a number of Japanese knives, mainly Tojiro and Watanabe. I don't have a ton of need for a yanagiba, but was looking to upgrade from my Shun and this knife was in the right price range, length and steel. It is a great looking knife but out of the box had no edge. Not unusual for a Japanese knife as I understand, but the first time I've bought a knife like this. Due to lack of patience it took me two tries to get it down to a proper edge, but the end result is exactly what I would expect from a knife of this steel. So 5 star performance and looks now, but I'll knock off 1 star for the effort to put the initial edge on it.

I have had this blade for all of 24 hours and I'm very impressed all the way around. I used it the first night to slice up some Sake and Hamachi and it performed wonderfully. It is perfectly balanced and sharp as a razor, not to mention easy on the eyes.

I have been using a Global knife for sashimi for a few years. Recently, have been cutting much more sashimi. This knife was exactly what I needed. The length is perfect. It's balanced so well I don't notice holding it.