DUE TO COVID-19 PACKAGE DELIVERY TIMES MAY BE EXTENDED. 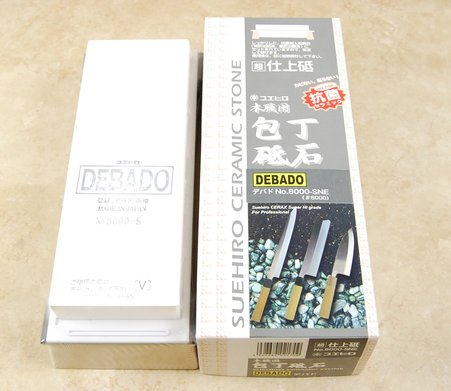 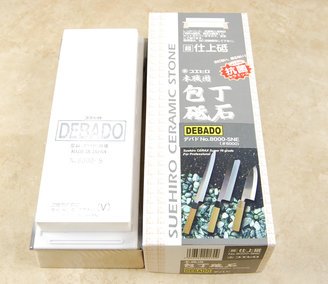 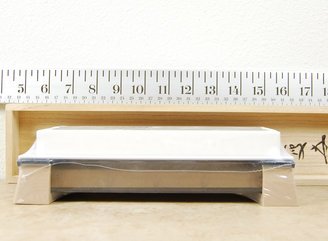 Suehiro Debado 6000x Ceramic Stone. These stones are professional grade and are made one at a time with artisanal care. They are large size, and come with a base, plastic box and nagura. Ceramic stones are excellent at cutting higher hardness steels so they work well on today's high end cutting tools. This stone is splash and go and requires just a little water on the top to start sharpening.

I wanted a good quality polishing stone, and I have a Suehiro Debado 1000 grit that works wonders on all my kitchen knives, so I bought this 8000 grit Debado. The stone comes mounted to a plastic plate, and the plate fits onto a clear plastic case that serves as both a storage case and a support for the stone during sharpening. When used as a support, the Debado stone surface is held about two inches off the counter so that my knuckles do not hit the counter while sharpening.
Unfortunately, the base easily slides on my counter during sharpening, unless it is placed on a rubber sheet or a damp towel. So I have removed the plastic plate from the stone, and I put the stone in a stone holder when used for sharpening. The clear plastic box still works well for stone storage.
To remove the plastic plate, I preheated my oven to 200°F (95°C), then put the stone and plate in the oven for about 15-20 minutes. (The stone should be very dry before putting it in an oven.) After the stone had come to temperature, I used a towel to remove the stone and plate, then carefully peeled the plastic plate off the stone. After the stone was cooled, it still had glue on it, so I used a lapping plate to wear off the glue from the stone.
Note that if you do this procedure, you will probably void any warranty, so be careful. On the plus side, you will have a double-sided 8000 grit stone.
Although the Debado 8000 is called Splash and Go, my stone required about a 5 minute soak for use. After that initial soak, the stone surface stops absorbing water and works just fine. It puts a fine polish on my knife edges.
I will also note that the dark gray swarf generated during sharpening seems to have a tendency to stick to the stone. My Debado 1000 does not absorb swarf, so a quick rinse will clean the 1000 stone between knives, but the Debado 8000 requires a regular but brief touch-up with my Atoma lapping plate during sharpening.

Was this rating helpful to you?   Yes No

Not having the experience of many customers here, there are stones which tend to bring the worst in my sharpening skills. Not this one - it makes me look better than I really am. Smooth, almost creamy, the knife seems to just glide right along the existing bevel. For me, that's a particularly great attribute for a finishing stone.

Was this rating helpful to you?   Yes No
Click here to review this product
(Reviews are subject to approval)