Most Orders Ship Within 1 Business Day 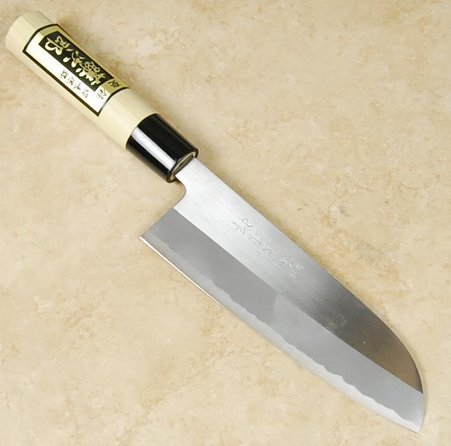 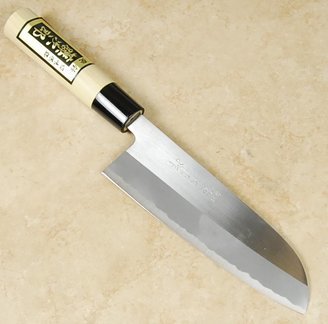 CKTG Handle and Board Wax
$8.95
Quantity:

CKTG 2 Step Knife Sharpener Closeout Sale
$2.95
Quantity:
The santoku is a very versatile knife which is finding favor in more and more western homes and professional kitchens. Santoku translates as "three virtues" and the trio of cutting tasks this represents are slicing, dicing, and mincing. The knives are characterized by their sheep’s foot shaped blade and shorter length. It can best be described as a short chef knife or gyuto with a bit more height.

The Tojiro Shirogami Hairline Santoku is made from Shirogami, or White, #2 steel. This is a very well regarded steel in the knife world. The alloy is clad with a soft iron layer which protects the inner core while lightening the blade. Both metals are reactive, so care must be given to clean and dry the knife carefully. The look of the blade belays its economical price. The upper blade road is subjected to a really nice hairline finish, while the lower portion is sand-blasted to offer a nice aesthetic contrast.

This is a wonderful knife to give to chefs or students looking to try something new. Newcomers to Japanese knives and home chefs on a budget will be amazed by the bang for the buck quotient of this great little cutter. It would also be a perfect choice for someone looking to try hand sharpening on wet stones.

14 review(s) WRITE A REVIEW (Reviews are subject to approval)

This was my first Japanese knife and I can already tell I will likely never find another deal this good. The first cut out of the box was quite literally jaw-dropping: it effortlessly fell through a bunch of box choy without making a sound and left a beautiful, waxy finish on the cuts. I found myself laughing over my cutting board and mumbling strings of religiously-tinged profanity to myself in disbelief.

Then, once I DID get around to sharpening it myself I was able to put a terrifying edge on it in minutes. It's true what they say about white steel making you feel like a master sharpener. I felt like Hephaestus himself after I was done, and I still have no idea what I'm doing. Edge retention leaves something to be desired, but that's actually working in my favor since I currently want all the sharpening practice I can get. I can imagine that would be less than ideal for someone in a pro kitchen, but I'm merely an avid home cook who finds sharpening enjoyable and meditative.

Reactivity was an issue at first (some discolored onions and garlic in the first week) but I quickly learned to wipe between ingredients and not let acidic ingredients stack up on the blade. It also developed a really beautiful patina within the first month and now I don't even think about the reactivity. What little care this knife requires is infinitesimal compared to how well it cuts for the price.

There are some sizable but surmountable caveats: the handle OOTB was sloppy, the blade had a really gnarly high spot in the flat section near the heel (an area of considerable interest for me as I'm primarily a push-cutter and chopper) which resulted in a lot of accordion cuts at first, and the spine and choil were very uncomfortable. But after sanding down the transition from the ferrule, softening the D profile, finishing the handle at 400 grit, and treating the handle with mineral oil and beeswax, I can now report that the handle is INCREDIBLY comfortable and just to my liking. I've even grown to love the plastic ferrule since it's really grippy until it gets greasy (pakka and horn get just as slick when they're greasy, but are less grippy when dry IME). Regarding the high spot, I've only sharpened the knife three times and it has already leveled out to the point where it's not affecting cutting anymore. The spine and choil got a quick progression of 220/400/1000 grit sandpaper and are now super comfortable and just as shiny as the rest of the knife.

Since getting to know this knife I have bought other, much more expensive knives and this humble santoku performs right up there with the best of them. I am astounded by the price to performance ratio on this knife, and as long as you have reasonable expectations for a knife that costs less than $50 you will be similarly blown away.

Performs along side the Hairline Nakiri with outstanding precision and feel. Overall well worth the money for such a great knife

I'm a home chef ans love this knife. Sharp oob and light . This is my first Japanese knife and will not be my last.

Unbelievable what can be had at this price level, and I got it on sale off the normally low price. Took a tour of the company website and really like how they run the company. They use some tricks to get the price down, such as stamping rough shapes, but that let's you get into sanmai construction with freaking white paper steel! Came out of the box perfectly sharpened. First test by owner showed it was doing the job on some potatoes. Warned her to keep the knife dry and it might patina. Sure enough a beautiful patina of blues and purples occurred all over the blade. I would rather see patina than deal with crappy stainless. Now I want one for myself!

Sharp out of the box. Great entry level knife of this style. Sharp thin blade and lightweight for vegetables. Great value... great hand feel. All around great kitchen knife.

I'm a casual home cook that recently caught the sharpening bug. I primarily bought this knife to practice my (beginner's) sharpening skills, and to see if carbon steel knife maintenance will discourage me.

Out of the box sharpness of this knife was decent. However, I was able to sharpen this knife very sharp (much sharper than my old, inexpensive, stainless steel knife). I actually look for things to cut!

It's also very reactive! Apple slices I had cut turned black in a few hours. However, it no longer does this after developing a patina. In fact, I was quite pleased with the natural bluish-grey patina that developed.

For the price, this knife well exceeded my expectations. I am so happy with this purchase!

I have several Japanese knives, but I've never spent over $180 for one. I had to buy this cheap knife just to see what it could do. I wanted a carbon blade. I did a little sharpening and stropping on it, not much though. It works very well and I believe it is worth more than the price it is going for. The other positive characteristic of this knife it its weight. It is very light. I am happy I bought it.

Way over looked knife. This knife could easily sell for more.

With a different handle this knife could easily sell for much more. Performs as well as knives twice it price.

These are great knives. Sharp when delivered, and easy to sharpen when needed. A really good value.

Great knife. Hair shaving sharp out of the box. Handle needed a little sanding and refinishing to be waterproof. 15 mins on the 5k and 12k shapton stones and it's incredibly sharp. Only downside is the propensity to rust but I knew that going into it. Grab yourself a rust eraser and the knife is the best $30 I've ever spent.

this is a sweet little knife, i bought it because it was so cheap and have been using it every day for prep and any line work, comes pretty dull but the shirogami steel takes a great edge and since i put the razor edge on it if i just give it a quick hone after each day of use its back to shaving sharp. buy it, theres no good reason not too at this price

this knife is probably the best santoku you can get for the price, the blade was pretty dull out of the box but after running it on a 1000/6000 stone it is shaving sharp, i used it today for a bunch of prep and gave it a quick very gentle hone on a ceramic rod and its sharper now than when i started with it (after the sharpening). great knife, i am very pleased

Great value, easy to sharpen, great edge, nice grind. Handle fell of in a week but there are ways to fix that such as bee's wax or epoxy. Handle needs sanding but that is easy. I will be buying a 210 Gyuto version of this knife. Gotta Love White