Free Shipping On All USA Orders Over $99 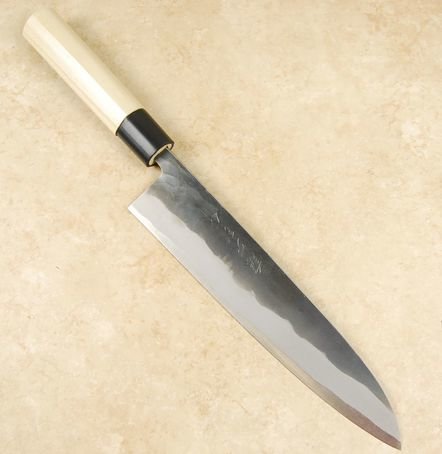 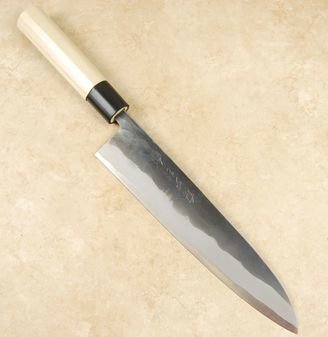 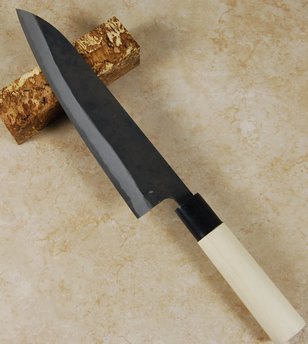 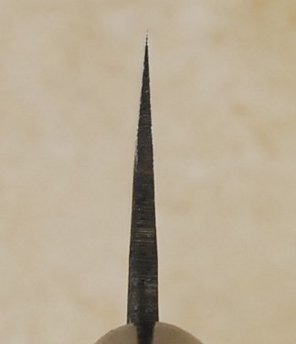 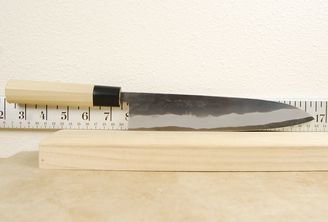 CKTG Handle and Board Wax
$8.95
Quantity:
The Tojiro ITK Shirogami Wa-Gyutos are a product of customer demand. This line of Tojiro ITK "In The Kitchen" knives are custom made for chefknivestogo.com. The line started with the popular nakiri and santoku knives, and soon customers were asking for gyutos. And here they are: specially commissioned gyutos made of White #2 Shirogami steel. The Shirogami steel takes a scary sharp edge, and is known for its superior performance for the price. The Shirogami core (exposed at the edge) is clad with the same type of steel, but with a dark, rough-looking kuruochi finish. Both are reactive when exposed to moisture and acidic foods. The knife will change colors (hues of blues and greys are typical) which is a great characteristic to play with, though it is also prone to rust if it's left wet. This steel is also quite hard, so care is needed so as to not chip edge. The blade is attached to a Ho wood handle with a plastic ferrule. The 210mm Gyuto is, hands down, the most popular knife size for home cooks, and this Gyuto in particular is at the top of our best sellers list because of the screaming hot price. This is a great all-around multi-tasking blade for a great price.

12 review(s) WRITE A REVIEW (Reviews are subject to approval)

Love this knife, it's my first entry into true quality knives and it's been a great entry point. Razor sharp and a really pretty blue hue on the spine.

It's my first time working with a carbon steel knife too and I was expecting more rust. So far no rust, all I have noticed some tinting around the edge.

I added some mineral oil and another coat of mineral oil + beeswax to the handle (use the same for my cutting boards) but other than that haven't had to do any other maintenance at this point. I think it's great value at this price point.

Bought this knife over 5 years ago. Well made and the steel has held up. I read one review about the blade chipping but I haven't experienced that. I did sand the handle a bit and took some steel wool to the spine of the blade. A bit rough when I got it but that was just cosmetic. Knife is easy to sharpen and it cuts. I purchased a ChefsChoice sharpener wit the Trizor 15 degree angle. This was one of the less expensive knives that I ran through the sharpener. All I can say is it's dangerously sharp. Really a pleasure to use and such a value at the current price.

This knife is great and makes cooking a joy!

Thanks for your service, March 5, 2020
Posted By: Yeo changjun - verified customer

Cuts through everything like a laser and has great edge retention, not to mention incredibly easy to sharpen this steel back to a pristine edge

I bought this knife in 2011, which was the first or second shipment CKTG received. So keep in mind there may have been small changes.

Out of the box, the edge was unbelievable. Sharper than anything I'd ever used. However, the finish and the blade thickness caused a lot of problems with wedging and friction through product.

After a few months, I got fed up enough to sand off the finish down to 1000 grit and that solved the problems with friction. However, the thickness of the made itself remained an issue the entire time I owned this knife. For most soft vegetable, it wasn't an issue, but it became a problem with things like hard winter squash and watermelon. So keep that in mind, not a deal breaker, but there may be some limitations.

The handle was also really comfortable.

Now, let's get to the steel itself, and here I honestly can't say enough good things. I learned to sharpen knives with this, and was spoiled for years because it seemed like all I had to do was wave it over the stone and oooooh my god was it sharp.

The edge would literally fall through celery or onion without any pressure, just the weight of the knife. Maybe that's normal with Japanese steel, but I'd never experienced that before.

It was lively, too, in a way unique to carbon steel. I don't know how else to describe the effect except that stainless blades feel muted to me now. All carbon steels share this, but this ITK gyuto stands out more than others.

I did chip the edge occasionally, but I honesty could not tell a difference in the cutting performance because the rest of the blade was so sharp.

I finally passed it on to a very good friend who didn't have a good kitchen knife. Despite not having sharpened it in a couple of months, the blade still outperformed any other knife I've ever used in the last meals I prepared with it.

I can't say enough good things about this knife, and the only reason I'm not giving it five stars is because of the finish it came with. Maybe there's some trick, but as I said, sandpaper and a couple of hours solved the problem for me. For $70, and the chance to own such an amazing piece of steel, it's really a no brainer for any inexperienced/impoverished cook.

This particular knife, a Japanese style "Gyuto" was made out of Hitachi's Blue Paper No. 2 steel. As such it performs as good as it is supposed. Very fas delivery and great packaging. Indeed, I am very happy with this knife and want more made by Tojiro - a trusted brand in Japan itself.

Can't beat the the price for this steal. Fit & finish is horrible hence the great price. Steal has slight tool Mark's which gives it authentic character. Edge came razor sharp better than some $300 dollar knives I have. Definitely going to get a full set. If your willing to give a little on fit & finish can't beat the steal & craftman ship for such a low price.

I like the curve of the blade it's flatter than my global 8&quot;and a little longer, a little taller too which is nice and forgiving to use the finish on it wasn't actually black though like the pictures looked but a dark blue color. I actually like that better. But this one and the 240 mm kiritsuke itk didn't have a finish on the handle so I had to sand them stain them then finish them myself but they look great now. Out of the box it was pretty sharp but after a quick touch up on my stones it's scary sharp. Great knife for the price

This knife sharpens up like a dream! Unfortunately, the kurouchi finish quickly wears away, leaving a very reactive iron cladding underneath. I'm used to vintage Forgecraft/Ontario knives, so not unfamiliar with carbon steel, but this very reactive and I didn't find it suitable for even a low-key professional environment.
I am keeping it around for home use, but replaced it at work with a stainless-clad Kohetsu 210mm Gyoto, which also gets scary sharp and didn't cost that much more. Of course it has a Western handle, so not a direct comparison, but I was willing to let that go for the fact that I don't have to babysit it.

Thanks, Mark, for the great selection and service.

I was surprised that our came in sharp and it cuts again. Best purchase I've made in awhile.