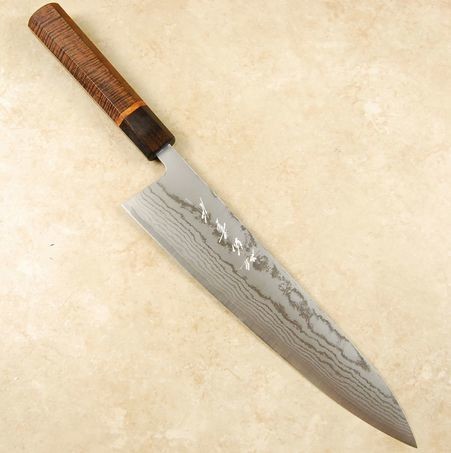 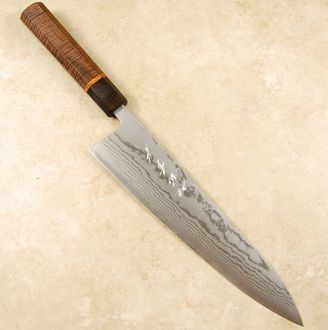 The 240mm gyuto is a great midsize knife that affords a little better reach for larger produce and higher rocking, and the Tanaka Sekiso damascus version is no affront to that convention. Made with high quality and specially heat treated VG10, this knife will give you great looks, easy care and outstanding performance.

The Tanaka are ground masterfully with a very graceful convex that will shed food as well as any knife out there. Tanaka knives are well known for coming out of the box swinging with a really nice working edge already in place. A little bit of strop time will get these blades screaming sharp.

The knife you are buying has a gorgeous custom handle on it and is the one in the photo.

6 review(s) WRITE A REVIEW (Reviews are subject to approval)

Ordered on Friday afternoon and received on Monday, pretty impressive since I live in Australia. It's a beauty, it's too sharp OOTB. I can't rock coz it sticks in the board. Just flies thru product, chops lemon grass as if it were shallots. To call a spade a spade, the handle sux. But I can look past that. I wouldn't hesitate buying another tanaka. Thank you CKTG.

I love this knife super clean...i use this to cut some veggies and fruits and its effortless...just take care of it because of patina and be very carefull its scary sharp got minor cuts just by touching the blade by accident...

I got this knife for Christmas and have been using it at work for the last month. Overall I have been very impressed with the knife. Wasn't as sharp as I would have liked out of the box so I took it to the stones, I'm still learning how to sharpen knives with Japanese water stones and I was able to get the knive razor sharp after about 10 minutes. The Blue steel is a dream to sharpen but It will rust. You can't let this knife sit wet on your cutting board after you use it, you have to immediately wipe and dry the knife in order to avoid rusting. This isn't a problem as long as you keep it dry/wiped clean. After I'm done with my cutwork I put this baby back in the box and grab a stainless knife to leave on my cutting board while i'm cooking on the line. This isn't a knife that will take a lot of abuse so make sure you have a workhorse like a wusthof or henckle in addition to this knife if you are in a professional setting.

I have a Kurouchi Nakiri from Tanaka and wanted to give his Sekiso series Gyuto a try. When I first got it, it was love at first sight, but I was a bit concerned. It was a touch thicker than I was expecting. I have tried some other knives in the past and had some wedging issues due to the thickness. I sliced up some onions, potatoes, mushrooms and carrots. The knife just sailed through everything with very little sticking. Upon checking out the blade a bit closer, I saw that behind the edge is very thin and it's convex ground up the sides. Also, the layers of damascus give a slight ridge and food falls/slides off easily. The potatoes felt like they were cooked and the carrots had that soft feel to them when cutting, even though everything was raw. Mushrooms, performed as well as my Tanaka nakiri, same with the onion!! The blade was even sticking in my new Loftis Walnut Board occasionally, too, which I have never had from a knife OOTB. I would have to say this is the sharpest knife I have gotten out of the box and one of the best cutters I have used! It's not a laser, but its now become my all around go to workhorse gyuto!! I'm looking at adding a few more blades in this series to my lineup!!

I've been looking for a blue steel knife for a little comparing, and this one fit the bill. Very light and nimble. Edge was very good out of the box, (used for a week solid at work with just stropping after the day was done) Very nice looking with the Damascus, and will take a patina rather fast, and like all carbon, some care is required. Two let downs though. One: The handle. Not the greatest. A little rough, but the knife makes a good candidate for a custom handle if you so wish. Second: On mine at least was a rough patch on the heel. Once again nothing very had to fix, but something else. Can't really find myself not giving it a 5 though even with the small problems as the performance and beauty of the blade more than make up for the things. And the usual great service from Mark.

Tanaka makes excellent knives - I was happy with his petty knife, and based on that experience elected to buy the 240 gyuto as well. The blade is thin, light, and capable of holding a fine edge. It is always a pleasure to use any of my Tanakas, and the 240 gyuto is no exception.