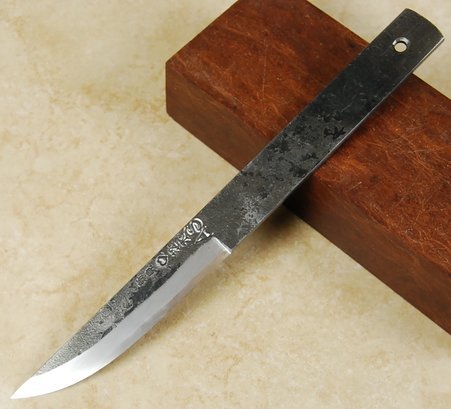 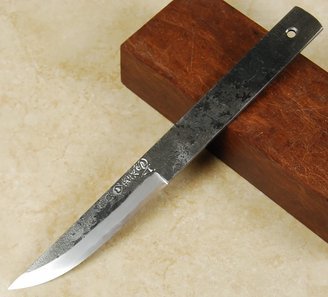 We are honored to be distributors of the Takeda brand of knives. Shosui Takeda is a third generation blacksmith and is one of the most talented blade makers that we represent. Takeda-san and his family handcraft their world renowned blades out of their workshop in Niimi, Japan.

The blade is carefully and painstakingly hand forged and tempered out of Aogami Super Steel. This process is undertaken entirely by eye so each and every blade is uniquely different.

This Kogatana is a very versatile little knife. You can use it as an all purpose paring knife, box cutter, utility knife, fishing knife or for crafts and cutting paper. It is light and small and can easily fit in your knife tackle box, glove compartment or knife bag. This is what knife enjoyment and appreciation are all about. A little gem.

Please note that all measurements are approximations! Takeda-san and his helpers make each of these knives by hand, without a template. As a result, every knife is unique and the stats will vary.

3 review(s) WRITE A REVIEW (Reviews are subject to approval)

I'm impressed with this knife. A kogatana such as this looks unique in its utilitarian way residing on a magnetic knife strip among other knives. For me it has a coolness factor therein. Its asthetic aside, this knife is the sharpest I've owned. I bought whet stones about a month ago and watched some Bob Kramer videos on YouTube on hand sharpening techniques; I then put my beloved CIA Hyde Park 10" chef's knife that I've used for ten years as well as a Hencke's 4" paring knife through the paces on the stones. They got a little sharper, but won't cut the hair off my wrist. This kogatana I sharpened with the same technique as my other two and it not only wipes hair off my arm, I used it in the bathroom to shave my face. It doesn't work as well as a Gillette multi-blade, but it still lightened the scruff. Incidentally, I hope none of my dinner guests happen upon this review.I will add one caveat about this knife. I'm used to using a German paring knife which has a very thin blade, what I believe on this website is referred to as a "laser," so one of the first differences I noticed about this kogatana compared to the Western-style knife is when I cut some veggies: the blade is fat. It really must wedge its way through food. I cut some sweet potatoes tonight with it and the pots nearly rip in two as the knife forces its way through. Bottom line: If I were to drop this knife and it breaks in half, I'd buy it again to replace the broken one.

great knife sharp ootb but I had to put a new edge on it so I put up to a 10k and stropped on .25 micron diamond spray on horse, now scary sharp and so agile to do any paring needs in the kitchen.