Free Shipping On Orders Over $100 In the USA 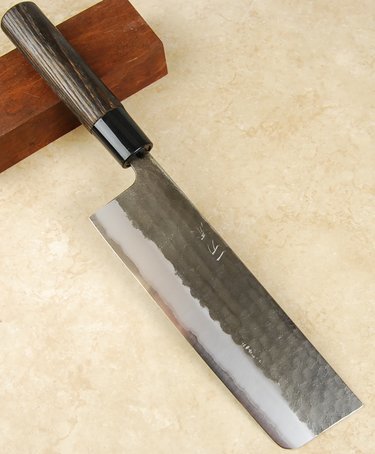 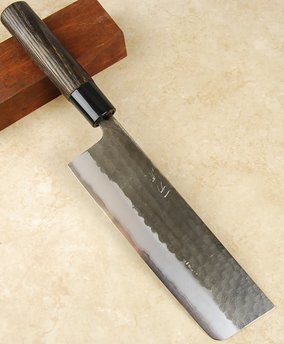 CKTG Nakiri Saya A
$30.00
Quantity:
Nakiri knives are becoming very popular in western kitchens. They are a relatively new shape in the west but a staple in most Japanese kitchens. Their main job is to chop vegetables (Nakiri means “greens” in Japanese) but they are also a very good choice for many other cutting tasks around the kitchen. They differ from the Japanese deba in their shape, as they have a straight blade edge suitable for cutting all the way to the cutting board without the need for a horizontal pull or push. They are also much thinner than the deba, with a taller blade height.

The Itto-Ryu nakiri is a knife that looks and performs way outside its price class. It can easily be compared to knives costing twice as much…and more! The fit and finish is as good as many highly regarded knives. But what really sets this nakiri apart from its peers is its ability to fall through produce with consummate ease. This is achieved by the combination of a fair amount of heft and a high convex grind. It really is a cutting and chopping powerhouse.

Itto-Ryu utilizes the very popular Hitachi white paper #2 steel as the hagane (inner core) and a jigane (outer cladding) which is applied in an attractive and durable hammered kurouchi finish. This gives the knife a distinctive look while aiding greatly in its excellent food release properties.

Great looks. Outstanding fit and finish. Performance to match all but the best knives out there. And all at a price almost beyond belief. You just have to give this or any other Itto-Ryu hammered blade a try. We know you will be impressed.

7 review(s) WRITE A REVIEW (Reviews are subject to approval)

The knife is very well made and very sharp. Attention, the steel is very reactive, that means clean it immediately after use. But this is normal for the type of steel.
Great value for money. Thanks for the fast delivery to Germany.

The knife is beautiful. Cuts threw vegetables like butter. The blade is very sharp so it's easy to get precise cuts. My Gyuto was from Cher Knives as well and I love that knife too! Going to keep adding to the collection.

Fantastic knife. Superb craftsmanship. Both beautiful and functional. With the gorgeous semi custom maple/wenge handle, for my taste, the balance is perfect. I had CKTG sharpen it so it was shaving sharp out of the box. As always customer service was top notch.Sincere thanks to the whole crew at CKTG.

Such Excellence at this Price is Ridiculous, April 27, 2017
Posted By: Kevin Rosinbum - verified customer

Utterly fantastic. Several months ago I wished to purchased the Ittu-Ryo gyotu 210mm or 240 but all were out of stock and had been for about a year or more. I waited a couple weeks but eventually chose a Masakage gyotu instead, which is very good but I must say pales in performance in comparison to this Ittu-Ryu. Upon learning these were back in stock I could not justify another gyuto so chose this nakiri - it is insanely good, and as other have pointed out, not just for the price but in general just excellent. This has in less than a week become the most used blade in the kitchen. I am new to this blade style but am warming up to it immediately and have already managed to remove a large portion of finger pad by way of the very thin and sharp pointed heel of this blade and its geometry. Out-of-the-box sharpness for this new batch is far from what others have reported - my received nakiri was and is frighteningly sharp at the onset and I've only stropped it a few times thus far. So thin beind the blade, this thing utterly demolishes any produce ingredient prep task. Thicker at the back (and perfectly finished and rounded) making it very sturdy at the same time. I am tempted to pick up the petty and the 240mm gyotu. These are that good.

This was my first Nakiri so my original thoughts about it were based on the type of blade as much as the actual knife itself. And those thoughts were a bit ambivalent. I was not sure about the feel of it or the way it forced me to cut. Having lived with it and a few other nakiri since then my feelings have changed quite dramatically. This is a really nice knife. One that cuts with consulate ease. It has a balanced weight to it and feels secure in your hand. It is easy to sharpen and while not an extraordinary edge holder it does a fairly good job of staying sharp. It is nice and easy to maintain. It looks absolutely fantastic. (I have custom handle on mine) Then add in the really affordable price and you have a winner which ever way you look at it. This is an easy to recommend introduction to the Itto brand and the style of knife.

Beautiful and terrifyingly sharp. I've been using it for a few weeks now and absolutely love everything about this knife. Size, heft, comfort and the crazy pleasure of cutting veg with this thing. It just glides through product to the point that I really look forward to using it. I did have it sharpened by CKTG before receiving it so can't comment on the out of box edge.

Wonderful knife; absurdly good for the money. I found it quite sharp OOTB, easily passing the paper towel and arm shave tests. Its heft and balance really do give the impression that it falls through produce. A pleasure to use and the best looking knife in my collection.