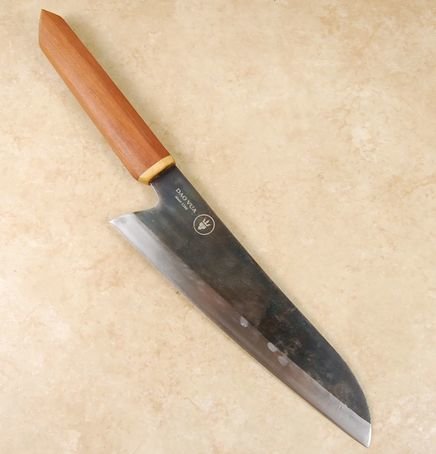 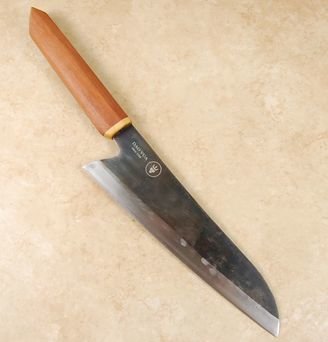 Daovua Pipeline Steel Gyuto 210mm. Our friends the Nhat family, from Vietnam, have made a new knife with an updated ergonomic handle as well as using a new type of steel which is made from recycled pipelines. They claim that it is better quality steel than the leaf spring steel they've been using. Here are the specs.

4 review(s) WRITE A REVIEW (Reviews are subject to approval)

Strong and light weight. Came un sharpened but got it to where I wanted after some work on a stone. Can't beat the price and would definitely recommend to others

For the price, this knife is very nice. It's somewhat flexible but still feels solid. Lighter than it looks and well balanced. Handle is comfortable.

Just received this Gyuto song with my fourth leaf spring knife - this time a Bunka. Both fairly dull as received so went to the stones. The leaf spring sharpened to razor quickly using only the 5000 grit stone and a strop. After 3-4 times as much work on the 5000 grit the pipeline blade improved only slightly, so I went to the Cerex 1000 which after considerable work brought the edge into line, followed by finishing on the 5000 and strop. No question- the pipeline steel is significantly harder than the leaf spring and should hold an edge considerably longer between touch ups. The belly of the pipeline Gyuto is much rounder than the leaf spring version( which I've had for a while now); a different knife all together which it will be fun using. Thanks!

Read reviews, read reddit, was on the fence figured why not try it. Was dull out of the box sharpened up nicely on stones tho. Great shape well made looks gorgeous. Much lighter than it looks and I've used it daily for a week its my new favorite knife. I don't review but wanted to throw this out there for other people on the fence